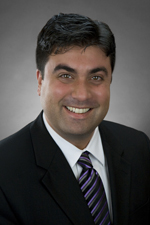 Justin Penn defends the interests of companies and individuals in the financial services industry in jurisdictions across the country. He splits his time between Hinshaw's Chicago and Los Angeles offices. Justin is the leader of the firm's Consumer Financial Services Practice Group, where he has played an integral role since starting with the firm in the early 2000s. His extensive experience includes handling state and federal consumer statute litigation, including claims involving the:

In addition, Justin advises corporations and professionals in professional liability and employment-related litigation. He has handled a wide range of legal malpractice matters, including cases involving an attorney's liability to non-clients. Justin has also represented hospitals, corporations, and religious organizations in complex litigation.

Before joining Hinshaw, Justin was a summer associate with a Chicago-based civil litigation firm. He also served as a Judicial Extern for the Honorable Wayne Andersen, U.S. District Court for the Northern District of Illinois.

Prior to his legal career, Justin was a travel director for INTRAV, Inc. in St. Louis. Additionally, he worked for NBC Sports in production support for live, televised sporting events around the world, including University of Notre Dame football, the French Open tennis championships, and The Championships at Wimbledon.