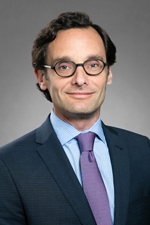 For nearly two decades, Schuyler Kraus has dedicated his practice to defending clients in consumer and class action matters. Armed with a wealth of experience and industry knowledge, Schuyler represents mortgage lenders, servicers and investors in state and federal actions alleging mortgage fraud, predatory lending, and violations of state and federal consumer protection statutes. He defends a variety of claims brought against his clients including those under the:

Focusing on the intersection of regulation and litigation, Schuyler advises his clients on regulatory and compliance counseling matters, including complaints involving the Consumer Financial Protection Bureau (CFPB), as well as the State Attorney General's Office.

Schuyler's clients not only benefit from his deep knowledge of the procedures and practices of the state and federal courts throughout New York—including appellate matters—but also his commitment to integrate and leverage technology to provide them with cost-effective options from intake to resolution.

Schuyler has been active in the firm's management, serving terms on Hinshaw's Management Committee, the Executive Committee, and as Co-Chair of the firm's Consumer Financial Services Practice Group.

Prior to his career as an attorney, Schuyler was Deputy Director of the County Court Victim/Witness Unit at the Boulder County District Attorney's Office in Boulder, Colorado. He served as liaison between district attorneys and the victims of violent crime with regard to all court proceedings.