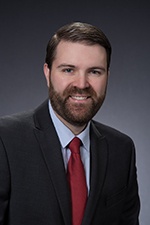 Taylor Bowman focuses his practice in the area of insurance services. A former Assistant State Attorney, Taylor's clients benefit from his extensive trial experience. He is involved in all phases of litigation, from discovery and legal research to depositions and drafting motions.

Prior to joining Hinshaw, Taylor was an Assistant State Attorney for Florida's Tenth Judicial Circuit. During his tenure, Taylor prosecuted thousands of cases ranging from simple misdemeanors to complex felonies including attempted first-degree murder. He gained valuable trial experience having first-chaired nearly 15 bench trials and nearly 20 jury trials. While in law school, Taylor was also a law clerk for a labor and employment firm in Jacksonville, Florida.

Taylor was a member of the number one nationally ranked Moot Court Honor Board during law school, where he competed in five national competitions arguing a variety of legal issues including workers' compensation, statutory interpretation, legal ethics, and bankruptcy. In addition to being a member of the Phi Delta Phi Legal Society, he was also recognized as a Dean's Scholar and was named to the Dean's List for multiple semesters. Taylor also received a book award for the highest grade in Public Speaking for Lawyers. Due to his hard work and dedication, Taylor graduated in the top 8% of his class.

In addition to spending time with friends and family, Taylor enjoys running, college football, cooking. He also has a passion for aviation and anything to do with the Chicago Cubs. Taylor and his wife are proud parents who welcomed the birth of their son this past December (2017).