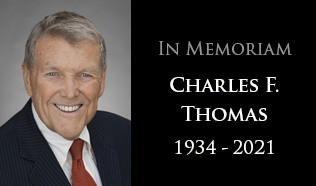 It is with great sadness that Hinshaw announces the passing of long-time Hinshaw partner Charles "Chuck" F. Thomas of the firm's Rockford, Illinois office. Chuck was an inspirational leader and great friend to many at the firm, serving in a variety of senior management positions. In 2018, he was awarded the Edward Potter Lathrop medal by the Winnebago County Bar Association for his "significant and positive influence" on the legal profession and the "quality of community life" in Rockford.

Chuck joined Hinshaw in 1985 and practiced law in Rockford for more than 50 years. He served as an advisor to Rockford area banking institutions for more than 30 years, including 24 years as a member—a decade of which was spent as the Chairman—of the Board of Directors for BancServe Group (formerly known as City National Bank of Rockford) which subsequently became First of America Bank, National City Bank and now PNC Bank. Chuck also served on many community and charitable organizations, including over 30 years on the OSF Healthcare System Board of Directors.

All of us who had the pleasure and privilege to know and work with Chuck remember him as a compassionate and humble leader, whose gracious humanity was evident in all aspects of his life. Our thoughts and prayers go out to Chuck's wife, Sue, and all other members of his family.

OSF HealthCare published a press release commemorating "one of [OSF's] most loyal and dedicated supporters."

Rockford Register Star published an extensive story on a man "never content to stand still" and who "always led by example."

His clients ranged from small, private companies to publicly held companies, with a particular emphasis on counsel to banking and financial institutions. Chuck advised public companies in acquisitions and takeovers, and served them as outside general counsel, advising on day-to-day operational matters. He represented clients in state and federal court and argued before the U.S. Supreme Court.

Chuck was a noted advisor to Rockford area banking and financial institutions for decades. He served on the BancServe Group formerly City National Bank (later PNC Bank) Board of Directors for 24 years and was Chairman of that Board for 10 years. He also served on the boards of Byron Bank, Boone State Bank, and First of America Bank.