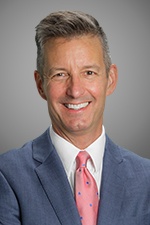 As a business and commercial transactions attorney, Todd Young advises clients on virtually all manner of corporate issues, ranging from mergers and acquisitions to corporate governance and financing. He works with clients from an array of industries with annual sales ranging from $5 million to $1 billion. Todd has helped U.S. entities navigate domestic matters, and has also served as U.S. counsel for non-U.S. entities on their U.S. acquisitions and in other matters for their U.S.-based affiliates.

Over the course of his career, Todd has represented purchasers and sellers in a wide variety of complex acquisition and disposition transactions. He also regularly counsels issuers in private offerings of securities.

Todd also works with lenders and borrowers, handling various types of finance and loan transactions. He has assisted several overseas corporations in the purchase and sale of U.S. entities.

In his financing work, Todd has a particular focus on representing lenders in ESOP loan transactions. Todd's ESOP practice further includes the representation of ESOP Trustees and company sponsors of ESOPs in ESOP-related transactions. He also has advised lenders in both stand-alone and syndicated loan transactions with aggregate loan amounts ranging from $20 million to $150 million.

Active in the firm's management, Todd is one of the longest-serving members of Hinshaw's Management Committee. He is also a former member of the firm's Executive Committee and a past co-leader of Hinshaw's Commercial Transactions Practice Group, and was previously a regional director for the firm.

Todd has long played a role in Hinshaw's diversity, equity, and inclusion efforts. In addition to helping to develop the firm's LGBTQ anti-harassment training program, Todd founded Hinshaw's LGBTQ Affinity Network, for which he serves as co-chair.

Leveraging his legal knowledge—and passion for working with the next generation of lawyers—Todd was also an adjunct professor at Northwestern University Law School. From 1999 to 2010, he taught a course on mergers and acquisitions.

During law school, Todd was an active member of the Law Review, serving both as a comment editor and an editor. While completing his undergraduate degrees, Todd completed a course of study at the Université de Toulouse in Toulouse, France.