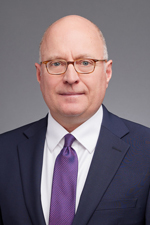 Matthew Henderson concentrates his practice in the representation of attorneys in all aspects of professional liability and ethics including the defense of legal malpractice and breach of fiduciary duty actions, providing risk management and legal ethics advice, defending lawyer disciplinary proceedings, and litigating attorney fee disputes and sanctions motions.

Mr. Henderson regularly speaks and writes on attorney malpractice, legal ethics, attorney discipline, and risk management. He serves on the Chicago Bar Association Committee on Attorney Malpractice and also on the Professional Responsibility Committee. Mr. Henderson is also a member of the Illinois State Bar Association.

Mr. Henderson was an author of the American Bar Association's Amicus Curiae Brief filed in the United States Supreme Court case, Williams-Yulee v. the Florida Bar,135 S.Ct. 1656 (2015). The brief, which argued the ABA Model Rule prohibiting judicial candidates from personally soliciting campaign contributions does not violate the First Amendment, was cited twice in the decision.

He appeared on the “Law & Murder” episode of People Magazine Investigates which was nationally televised on the Investigation Discovery (“ID”) Channel, Season 4, Episode 7, December 16, 2019. This episode depicted investigation surrounding the murder of Judge Joan Lefkow’s husband and mother in 2005, and featured Mr. Henderson’s account of litigating against the murderer in federal court prior to the crime.

Mr. Henderson appeared on NBC Channel 5 news and was quoted in the Chicago Tribune and Chicago Sun Times regarding his representation of Trinity Services, Inc. in a lawsuit filed by the parents of a patient seeking the entry of an injunction requiring Trinity to administer electric shocks to prevent the patient from injuring himself and others.

Mr. Henderson's speeches and presentations include: