Please note that the original published version of this newsletter stated that the ABA Model Rules of Professional Conduct do not address the tension between many states legalizing cannabis and the federal government still criminalizing it. While correct, some states have individually updated their own legal ethics rules to address this issue. While an exhaustive list is not included in this update, the revised version of this article now includes references to the rule updates made in New Jersey, Illinois, and California. Please refer to the rules in your specific state for the most up to date position on counseling clients regarding marijuana laws.

We have come a long way from the era when only criminal defense attorneys dealt with violations of cannabis laws. Today legalized cannabis is a burgeoning area of law that has many firms, large and small, trying to get a piece of the cannabis market.

For years, the conservative risk management approach for attorneys seeking to advise clients in this arena was to comply with Rule 1.2(d) of the Rules of Professional Conduct. Rule 1.2(d) prohibits counseling a client to engage in criminal activity or assisting a client in such activity, but permits a lawyer to “discuss the legal consequences of any proposed course of conduct with a client and may counsel or assist a client to make a good-faith effort to determine the validity, scope, meaning or application of the law.” Compliance was necessary due to the fact that federal law criminalized (and still does) the manufacture, distribution, or dispensing of marijuana pursuant to the Federal Controlled Substances Act, 21 USC § 846. There was no Rule of Professional Conduct that provided guidance to lawyers who were faced with a client who sought to do something permitted by state law but prohibited under federal law.

Since then, both medical and recreational use of marijuana has been legalized in an increasing number of states and territories. This means more businesses, income, taxes, and legal advice from coast to coast. While still illegal under federal law, to date, 37 states, three territories, and the District of Columbia allow the medical use of cannabis products. 21 states, two territories, and the District of Columbia have enacted measures to permit cannabis for non‑medical adult recreational use. There are still 13 states that outlaw marijuana entirely. See the chart below for more detailed information. 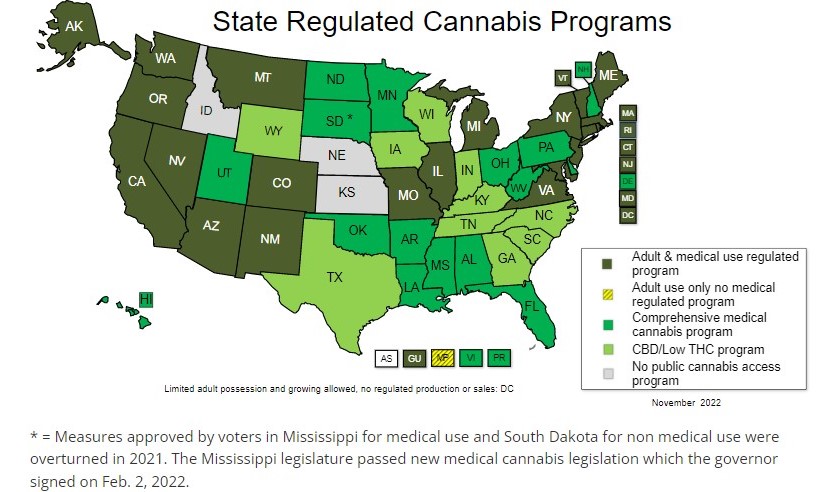 The recent midterm elections included cannabis-related measures on the ballot in several states. Voters in Arkansas, North Dakota, and South Dakota rejected measures for recreational marijuana use, and voters approved the legalization of recreational marijuana in Maryland and Missouri. President Biden’s proclamation on October 7, 2022 included a request for the Secretary of Health and Human Services and the U.S. Attorney General "to initiate the administrative process to review expeditiously how marijuana is scheduled under federal law."

On April 1, 2022 (no, this is not an April Fool’s joke), the Marijuana Opportunity Reinvestment and Expungement (MORE) Act was once again passed by the U.S. House of Representatives .[1] If passed by the U.S. Senate, the MORE Act would decriminalize cannabis at the federal level by removing it from the federal Controlled Substances Act,[2] criminal penalties for federal cannabis offenses would be eliminated, and past federal cannabis convictions would be expunged.

From a technical standpoint, though, the MORE Act does not legalize cannabis, which would be up to the states to decide—similar to the way alcohol is federally regulated. The federal government would impose a tax on cannabis sales starting at five percent and then increasing to eight percent over three years. Significantly, the passage of the MORE Act would open the door to research—since its illegality at the federal level means it is still technically illegal to medically research cannabis—and cannabis-related businesses would be able to use federally insured banks.[3]

The MORE Act would need 60 votes to pass in the Senate, but some have referenced the Senate’s own marijuana bill, which has yet to be considered in 2022. The Cannabis Administrative and Opportunity Act (CAOA), a bill sponsored by Senators Schumer, Booker, and Wyden, would remove marijuana from the Controlled Substances Act and allow states to determine their own cannabis laws. The first draft of the CAOA has a ten percent sales tax, increasing to 25 percent over five years, and the revenue generated would support restorative justice, public health programs, and safety research.

Now, even bankruptcy lawyers are having to navigate issues over the state-by-state legalization of cannabis. For instance, on November 10, 2022, a court-appointed receiver put the City of Chester, Pennsylvania into bankruptcy under Chapter 9. But the State of Pennsylvania has a legal medicinal cannabis program. The City of Chester, therefore, derives tax revenue from this technically federally illegal program.

The protections of the Bankruptcy Code have been universally denied to individuals and businesses that derive any portion of their income or revenue from the cannabis industry. Bankruptcy courts have held that federal courts cannot be used as a tool to support federally illegal conduct, and trustees cannot be forced to possess or sell cannabis or to assist in ongoing violations of federal law by participating in plans that utilize cash derived from cannabis-related activities.[4] In the case involving the City of Chester, a bankruptcy court will need to approve the petition and confirm the municipality’s debt adjustment plan if the City is allowed bankruptcy relief. It remains to be seen whether this case will play out differently for a municipality, versus an individual or business, and whether this might be the straw that breaks Congress’ back in terms of enacting reform sooner rather than later.

In 2021, legal U.S. cannabis sales grew 30 percent to $22 billion, significantly surpassing the amount Americans spent on wine ($17.5 billion) Cannabis sales are expected to rise another 20 percent this year.[5] It is clear that cannabis is here to stay, and the federal government should insert itself into the process—if only to reap the benefit of all the untapped tax revenue it could be generating. With sales skyrocketing and the continued expansion in legalizing recreational use on the state level, federal cannabis laws are needed more than ever. Legal work in this area goes far beyond completing applications and communications with the state. Advice is now sought to guide the formation of new cannabis businesses and assist those companies with legal compliance.

Various states have taken different approaches when they addressed this ethical issue. New Jersey for instance amended Rule 1.2 to specifically provide that a lawyer may counsel a client regarding marijuana laws and assist a client to engage in conduct that the lawyer reasonably believes is authorized by those laws. Illinois amended its version of Rule 1.2(d) to allow lawyers to counsel or assist clients in conduct permitted by Illinois law that may violate or conflict with federal or other law so long as the lawyer advises the client about that federal or other law and its potential consequences. California added a comment to Rule 1.2.1 adopting an approach similar to Illinois. Some states have addressed this issue by way of an ethics opinion.

Lawyers who are asked to represent a prospective client should first confirm whether or not his or her state has addressed this issue to ethically permit such representation and tailor the engagement accordingly. Lawyers should consider including a provision such as the one below in a cannabis-related engagement when and where permitted:

As you know, the possession and distribution of cannabis remains illegal under federal law, and is currently a Schedule I controlled substance under the Controlled Substances Act (CSA). As a result, the use, possession, or cultivation of cannabis remains a violation of federal law. Enforcement of the CSA in [insert state] is subject to the U.S. Attorney's prosecutorial discretion. If the federal government decides to enforce the CSA in [insert state] with respect to cannabis, persons that are charged with distributing, possessing with intent to distribute, or growing cannabis could be subject to fines, civil forfeiture of assets, and/or imprisonment. The United States Supreme Court has confirmed that the federal government has the right to regulate and criminalize cannabis, and that federal law criminalizing the use of cannabis preempts state laws that legalize its use. This engagement will not involve the provision of any legal advice specific to the criminal aspects CSA, and none of our advice is intended or should be construed as aiding or assisting in the commission of any crime including the CSA or any other federal law. Rather, the legal advice we will provide in this engagement is intended to assist you in complying with [insert state] law and to help you navigate applicable state and local laws and regulations. Due to the evolving nature of state marijuana laws and in light of the federal CSA, we cannot provide any guarantee or legal opinion on the ultimate enforceability of agreements whose subject matter may include the cultivation, distribution, possession or financing of marijuana.

Finally, in Colorado, where medical and recreational cannabis has been legal for almost 10 years, the state has now legalized psychedelics (following Oregon in 2020). Maybe that will be the next area of law to flourish, but that will be a trip for another day.

[1] The MORE Act was first passed by the House in December 2020 but the Senate did not give the More Act a hearing or a vote in 2020. This year, it was filed again and passed again in the House.

[2] Cannabis has been a Schedule 1 Controlled Substance (drugs with no currently accepted medical use and a high potential for abuse) for the last 52 years at the federal level.

[3] According to Reuters, only 7% of banks and 3% of credit unions offer a cannabis program, and some charge 400 times more for a cannabis business account than a typical business banking account. https://www.reuters.com/world/us/us-pot-sellers-stash-cash-banks-leave-them-high-dry-2021-05-24/