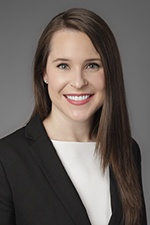 Shelley Bethune defends professionals in a wide range of liability issues, focusing on counseling attorneys facing disciplinary and malpractice matters. Having worked as Litigation Counsel for the Illinois Attorney Registration and Disciplinary Commission (ARDC), Shelley has a deep knowledge and understanding of attorney disciplinary proceedings.

During her tenure with the ARDC, Shelley investigated hundreds of charges of lawyer misconduct, including the misappropriation of client funds, criminal conduct, conflicts of interest, and the neglect of client matters. She also represented the Administrator of the ARDC in over 20 proceedings before the Inquiry and Hearing Boards, handling all phases of the litigation. Shelley further represented the Administrator in numerous pleadings before the Illinois Supreme Court.

With her extensive experience, Shelley also frequently presented to Chicago-area law schools, bar associations, and other entities on ethics and professional responsibility.

While in law school, Shelley clerked for the Cook County State's Attorney's Office, in both the Special Prosecutions Bureau and the Child Support Division. She was also an extern for The Honorable Rubén Castillo in the Northern District of Illinois.

Shelley was involved in a number of activities and organizations during law school. In addition to being an Associate Editor for the Loyola International Law Review, Shelley was on the Jessup International Law Moot Court Team for two years and served as Team Captain her second year.

Outside of work, Shelley enjoys trying new restaurants and spending time with her friends and family, especially her two nieces. She also loves to travel, and lived in China for a year and a half before law school teaching English to elementary students.

B.A., with distinction, University of Michigan, 2008