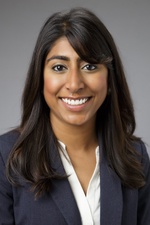 Ritika Narayanan is an immigration attorney. As a litigator, Ritika specializes in federal litigation, removal defense, and criminal immigration (crimmigration). She helps clients navigate this quickly-evolving legal landscape and handles all aspects of corporate and employment immigrant and nonimmigrant visas, along with family-based applications.

In addition to representing non-detained and detained adults — including Lawful Permanent Residents (LPRs) – Ritika previously represented clients appointed under the National Qualified Representative Program. As a former staff attorney with the National Immigration Justice Center, she advocated for unaccompanied minors pursuing U-visas, asylum, and T-nonimmigrant status before USCIS. Ritika has extensive, hands-on experience with every aspect of immigration law and has successfully adjudicated numerous removal cases in addition to working alongside and against numerous law enforcement agencies.

She has worked with clients throughout the country, focusing on the Midwest, New York, the West Coast, and Texas. During and after law school, Ritika developed a solid foundation of immigration legal knowledge, including working as a student attorney for the University of Houston Immigration Clinic and as a volunteer attorney with Catholic Charities of Dallas prior to relocating to Chicago.