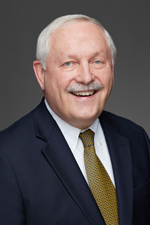 Kevin Sido has been a trial lawyer and transactional counsel for design and construction professionals, condominium directors and officers, lawyers, real estate professionals, and school officials for over four decades. His practice has also included insurance coverage analysis and policy drafting, as well as broad aspects of a civil trial practice. Kevin applies his extensive experience as a trial lawyer to the counseling and transactional needs of his clients.

In addition, Kevin has a significant background in alternative dispute resolution. He is a mediator and former arbitrator for the Circuit Court of Cook County, Illinois. He has served many years on the Panel of Construction Arbitrators of the American Arbitration Association. He serves on the panel of neutrals of ADR Systems of America, LLC.

Kevin has authored amicus curiae briefs on behalf of architect and engineer organizations, including AIA Illinois, SEAOI, ISPE, ACEC Illinois, and IPLSA in appeals concerning the economic loss doctrine, qualifications-based selection laws, construction statutes, and other matters. These include Thompson v. Gordon, 241 Ill. 2d 428, 948 N.E.2d 39 (2011) (an engineer's scope of duty is a question of law as set by contract, not a factual question for an opposing expert to opine); Christopher B. Burke Engineering Ltd. v. Heritage Bank, Ill. Sup. Ct. 2015 IL 118955 (a plat of subdivision qualifies as an "improvement" under Mechanic's Lien Act even if subdivision is never completed).

Kevin joined Hinshaw in 1975. He served 12 years on the firm's Executive Committee and headed the litigation section for over 20 years in the Chicago office. He is an adjunct professor at Northwestern University McCormick School of Engineering, the Masters in Project Management Graduate Program.

After successfully completing the Arbitration Fundamentals and Best Practices for New AAA Arbitrators training program in Los Angeles in 2018, Kevin became an active member of the American Arbitration Association (AAA) Panel. Kevin holds affiliate memberships with the American Institute of Architects – Illinois Council. For decades he held associate memberships in the American Society of Civil Engineers as well as the Structural Engineers Association of Illinois.

In the Fall of 2005, Kevin completed intensive training in mediation from the faculty of Pepperdine University School of Law’s top-ranked Straus Institute for Dispute Resolution and is a Certified Mediator in the Cook County Court-Annexed Major Case Civil Mediation Program. In 2009 he became a member of the Mediator Panel of the U.S. District Court, Northern District of Indiana.

Kevin frequently presents and lectures on litigation practice and construction law. He has been a lecturer and participant in professional meetings under the auspices of the American Institute of Architects, Illinois Society of Professional Engineers and American Consulting Engineers Council, as well as the Illinois Institute for Continuing Legal Education (IICLE). His recent presentations include:

Kevin is the editor of "Architect and Engineer Liability, Claims Against Design Professionals," third edition, published by Aspen in 2006. He regularly writes for the Illinois Institute for Continuing Legal Education (IICLE), including authorship of chapters with revisions and supplements on pleadings, contribution and indemnity, and condominium litigation.

Kevin has also written chapters for a number of books on civil practice and construction law, including:

Kevin has also published numerous articles on litigation and construction topics in AIA Illinois News, Engineering Times and Professional Engineer, as well as in other publications. He contributes to the "Management Practices" column of Consulting-Specifying Engineer and has written articles on school law and also real estate broker liability and litigation. His articles include:

Kevin has had extensive community involvement, including:

B.A., with high honors, University of Illinois at Urbana-Champaign, 1972