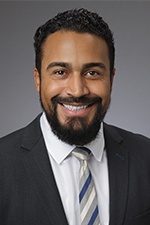 Prior to joining Hinshaw as an associate, Edet was a law clerk and summer associate with the firm. He also worked as a law clerk for a firm in Chicago that specialized in personal injury and wrongful death cases.

Before embarking on his legal career, Edet spent nearly seven years in the United States Marine Corps (USMC), several of which included serving in Afghanistan, Japan, Thailand, Australia, and the Philippines. Following his tours overseas, Edet returned to the U.S. and continued working for the USMC in Washington D.C. and Chicago as an executive administrator and personnel chief, respectively. During this time, he was also a congressional intern for U.S. Congresswoman Janice Schakowsky.

Edet left the military to pursue his education and the practice of law. In his studies—from undergrad through law school—he was involved in a number of activities and associations.

While attending law school, Edet was an active participant in the Loyola Community Law Center Veterans Practicum where he handled a variety of legal matters for veterans and their family. A Philip H. Corboy Fellow in Trial Advocacy, Edet represented Loyola in national mock trial competitions. This included competing on the teams that received first place at Golden Gate University's In Vino Veritas Mock Trial Competition for two consecutive years and first place in the region in the Texas Young Lawyers National Mock Trial Competition.

As a veteran himself, Edet was a peer mentor for other incoming veterans as an undergraduate student at Loyola University Chicago.

Edet is a Chicagoan who loves all things Chicago sports. He also enjoys great music, good food, and hearty laughs.