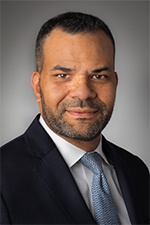 Douglas Henning defends the interests of school districts, corporations, and public entities. With a background that includes advising the Chicago Board of Education and Chicago Transit Authority, as well as handling high-profile matters in the private sector, Doug brings a well-rounded perspective and invaluable insights to the complex issues his clients are facing.

In addition to working with his clients to develop risk and compliance policies, Doug helps them navigate the procedures and best practices involving the prevention, investigation, and response to allegations involving sexual misconduct, including assault, harassment, and bullying.

As second in command of the legal department for the Chicago Board of Education—the nation's third-largest school district—Doug collaborated with school board members and senior staff to ensure legal and ethical compliance and handled the negotiation and drafting of complex commercial transactions. He also founded the Office of Student Protections & Title IX, which coordinates the district’s response to all reports of sexual misconduct and ensures Title IX compliance.

During his tenure with CTA, Doug was responsible for advising the general counsel and senior leadership on the agency's most significant commercial disputes. In addition to managing the legal aspects of critical contracts, he represented CTA in litigation involving the First Amendment, the False Claims Act (FCA), insurance coverage disputes, and pension fund litigation. He also drafted agency policy documents—including a first of its kind policy regulating advertisements on transit property and vehicles—and resolved government contract and procurement issues.

Additionally, while at CTA, Doug was responsible for managing the legal components of "Ventra," the agency's fare payment system. He negotiated and drafted complex software development and service agreements, supply chain contracts, and fare payment agreements.

Doug began his legal career as a corporate attorney and commercial litigator at the Chicago office of an Indianapolis-based firm. While there, he advised clients on purchase and sale terms and conditions, as well as insurance coverage issues, liability waivers, and regulatory issues.

Doug has given dozens of presentations to elected officials, school board members, district leaders, and members of the public on student focused and trauma informed organizational responses to sexual abuse, sexual harassment, and sexual bullying.

Doug is a devoted father who spends the majority of his time away from work laughing at—and amazed by—all of the incredible things his young daughter does and says.

B.A., University of Illinois at Urbana-Champaign, 2002