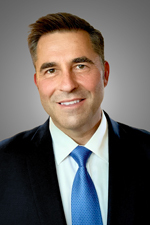 Conrad C. Nowak has a diverse national practice representing clients in high-profile, sensitive litigation. At the same time, he is committed to counseling clients in their day-to-day affairs and transactional matters.

In a Chicago Lawyer feature, one judge commented that Conrad:

"Has a manner that is usually reserved for lawyers far past his years and a likeability that is a powerful tool with witnesses and juries. Most importantly, he is a lawyer that strikes that elusive balance of being a fierce litigator, but at the same time, a gentleman."

One national client describes why he chooses Conrad to represent the company in litigation:

"Most of these matters are complex and involved, which is precisely why we ask Conrad … he has always worked to obtain the best result possible by providing exceptional advice that assists us with making well-reasoned decisions."

Crain's Chicago Business recognized Conrad, who previously served in the military, as one of its Notable Veteran Executives for his commitment to clients and the veteran community. Conrad has been a strong advocate for spreading awareness regarding veterans’ mental health, suicide awareness and suicide prevention, working with multiple organizations fighting for these important causes.

He has represented clients from the U.S., European Union, and Australia in matters pending throughout the country, including California, South Dakota, Iowa, Missouri, Alabama, Arkansas, Washington D.C., and others. He has also regularly committed time and resources in providing pro bono legal services to those of limited means.

Conrad joined Hinshaw after completing judicial clerkships for the Honorable William D. Maddux, Presiding Judge of the Law Division of the Circuit Court of Cook County, and the Honorable Sharon Johnson Coleman. As part of his responsibilities—which included the preparation for review, argument and ruling on significant motions before the court—Conrad also assisted with the management of the Cook County Asbestos Litigation Docket, which maintained approximately 6,000 cases exclusively assigned to the presiding judge.

While in law school, Conrad was selected to serve in two prestigious internship positions, one with the U.S. Attorney's Office for the Northern District of Illinois, and the other with the U.S. Equal Employment Opportunity Commission, Chicago District Office.

In addition to his other law school accomplishments, Conrad was the Featured Articles Editor of The Loyola University Chicago Forum of International Law and Assistant Features Editor of The Public Interest Law Reporter. He was a member of the Dean's List and a Student Representative for the Loyola Business Law Advisory Board.

Conrad also served as a non-commissioned officer in the United States Army, beginning his service with the 13th Infantry Regiment and subsequently being assigned to the 3rd BN, MID, 12th Special Forces Group (ABN). He is the recipient of numerous awards and recognitions.

He speaks Polish fluently and is familiar with Serbo-Croatian.

His additional presentations include:

Conrad is also a faculty member for Hinshaw University, the firm's nationwide attorney training and education program. He teaches continuing legal education courses in local rules, practice and procedure, and a deposition workshop. He has presented the following programs for Hinshaw U:

Quoted or mentioned in a variety of media for both his legal and non-legal accomplishments, including Fortune Magazine, The Wall Street Journal, Chicago Lawyer, The Chicago Daily Law Bulletin, and Polvision.

While an undergrad at DePaul University, Conrad was a starter on the Division I Men's Varsity Tennis Team and competed on the ATP Professional Tour, where he obtained a world ranking. Furthermore, he was a member of the Dean's List and the Phi Kappa Phi and Phi Alpha Theta fraternities.