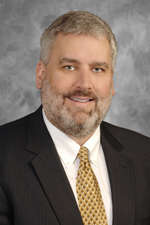 William Hardy is an appellate and trial litigation lawyer. His appellate practice includes emphasis on civil appeals in Illinois intermediate appellate courts, the Supreme Court of Illinois, and the United States Court of Appeals for the Seventh Circuit.

In June 2011, Mr. Hardy was installed as the 44th President of the Appellate Lawyers Association. He previously served on the Association’s Board of Directors for two terms, 2003-2005 and 2007-2008, and as Treasurer, Secretary and Vice President during the period from July 2008 through June 2011.In addition, Mr. Hardy chaired the Association’s website committee for two years and currently serves on several committees.

Mr. Hardy joined Hinshaw & Culbertson LLP in May 1989. He formerly served as legislative assistant for State Representative Joel Brunsvold (71st District), Rock Island, Illinois. In that capacity he was responsible for testifying at committee hearings, assisting with drafting of legislation, and working with local charitable organizations to obtain grants of public funding.

From 1994 to 2002, Mr. Hardy served as a contractual administrative law judge for the Illinois Department of Public Health where he presided over more than 50 administrative hearings in cases involving alleged abuse and neglect in nursing homes.

Mr. Hardy has served as a faculty member and lecturer at programs sponsored by the Illinois Institute for Continuing Legal Education (IICLE), the Appellate Lawyers Association, the Lorman Institute, and the Illinois Attorney General’s Office.

Topics on which Mr. Hardy has written include: