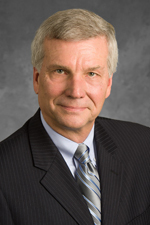 Robert Wagner, the former general counsel and acting director of the Illinois Department of Insurance, focuses his practice on national and international insurance regulatory and compliance law with an emphasis in transactions, complex litigation, insurance taxation, health reform, solvency and receiverships and product approvals.

Mr. Wagner has substantial experience representing payors in negotiating and contracting with pharmacy benefit managers, and advises clients on examinations and regulatory compliance issues connected with the Affordable Care Act and health insurance exchanges. During his term at the Illinois Insurance Department, Mr. Wagner served on NAIC committees and task forces responsible for the implementation of complex policy issues with national implications, including broker compensation, life settlement transactions and life insurance claims practices.

Mr. Wagner joined Hinshaw & Culbertson LLP in July 2012 and leverages his insurance industry experience to advance clients' business objectives. Much of his career has been devoted to public service. Previously he worked in various capacities with the Illinois Department of Insurance, including as counsel from 2000 to 2003, general counsel from 2003 to 2012 and acting director from 2011 to 2012. From 1989 to 2012, Mr. Wagner was also general counsel for the Illinois Comprehensive Health Insurance Plan.

Mr. Wagner began his legal career in 1981 with the Office of the Illinois Attorney General in Springfield, Illinois, where he became a litigation division chief in 1983. He entered private practice in 1986, first with Pfeifer & Kelty, P.C., in Springfield, Illinois, and moving to Peterson and Ross, in Chicago, in 1989. He maintained his own practice, Robert E. Wagner and Associates, P.C., from 1993 to 2003.

From 1986 to 2003 Mr. Wagner was also a Special Assistant Attorney General, representing the Illinois Insurance Department in a constitutional challenge to Illinois’ insurance taxation scheme.

Prior to his legal career, Mr. Wagner was an instructor and assistant department chair at Berklee College of Music, in Boston.

Mr. Wagner is a co-author of "State Insurance Tax Differentials and Regulatory Objectives: A Constitutional Analysis," published in Journal of Insurance Regulation, March 1990.

In his spare time, Bob likes to do a little jazz drumming.