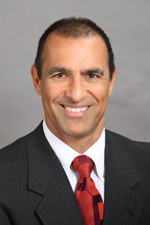 Mr. Tamaddon conducts periodic training of insurance clients' claims staff on legal, coverage and extra-contractual issues, and provides presentations regarding latest trends and developments in insurance law and industry. He often assists insurance clients in assigning and managing panel and local counsel for defense of underlying actions and serves as client liaison.

From 1989 to 1991, Mr. Tamaddon was an associate at Morris, Polich & Purdy, and also Parkinson, Wolf & Leo, both in Los Angeles. He joined Rosenfeld, Meyer & Susman, LLP, in Beverly Hills, California, where he remained until 1997.

Mr. Tamaddon worked as a Major Claims Senior Coverage Litigation Attorney at an in-house litigation firm for Resolute Management, Inc., a Berkshire Hathaway Company, from 1997 to 2003, and again from 2004 to 2006.

Mr. Tamaddon's law school accomplishments include the Stone Moot Competition. He was selected for moot court judge and advisor, and was the recipient of an American Jurisprudence Award.

Mr. Tamaddon was a co-editor of a prior firm's newsletter and during his undergraduate studies he was a writer for The Bowdoin Advocate. His other publications include: