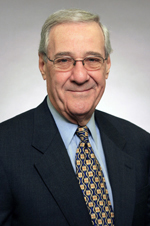 Kenneth Denberg is an experienced real estate and business lawyer in practice since 1960. He represents owners and operators of real estate in purchase and sale transactions, including complex, multi-state transactions for both established companies and new developers.

As a business lawyer, he handles the formation and representation of closely held corporations, limited liability companies and limited partnerships. He is experienced in handling secured real estate lending transactions, joint venture negotiations and estate matters as they pertain to business and commercial ventures.

Mr. Denberg’s clients also include restaurants and owners of liquor licenses whom he represents in alcoholic beverage licensing matters.

Mr. Denberg joined Hinshaw & Culbertson LLP in January 2007. Previously he was of counsel at the Chicago firm of Michael Best & Friedrich.

Mr. Denberg began his legal career in 1960 as an associate of Block & Solomon. He was a solo practitioner from 1965 to 1970, and in 1971 started his own firm, Bloom & Denberg, which later became Bloom, Denberg & Vanasco, and still later, Denberg, Vanasco and Shukovsky. In 1981, Mr. Denberg became a partner of Schwarz and Freeman, which later merged with Michael Best.

Mr. Denberg has been involved in all aspects of real estate transactions and liquor licensing matters. His representative transactions include:

General Real Estate: Mr Denberg’s clients in this realm include United of American Insurance, the defendant in a condemnation action. As part of the negotiation for settlement with the local park district, Mr. Denberg structured a spin-off of a part of the property being condemned as a separate parcel and made a contribution of that parcel to the plaintiff’s 501(c)(3) entity, allowing his client to convey the target property at a higher price and make the contribution to the non-profit at a higher gift value.

Mr. Denberg has also represented Universal Outdoor as a defendant in a condemnation action brought by the Illinois Department of Transportation. He negotiated with IDOT to pay a price based upon the income from the advertising on the signboard being taken rather than on the value of the real estate being taken.

Secured Real Estate Lending: Mr. Denberg has documented secured real estate loans for Success National Bank and Bank One, and has represented the latter in work-outs of non-performing loans.

Hotel Representation: For his client Hotel Management Plus, Mr. Denberg has negotiated with a joint venture partner for the construction financing and management of the Buffalo Grove Hilton Garden Inn, in Buffalo Grove, Illinois, and the Hampton Inn in Matteson, Illinois. He also ran the negotiations with the construction and permanent lender on these projects.

Corporate and Estate: Mr. Denberg guided Nortech Telecommunications, Inc. in the negotiation and sale of its business and assets to Black Box, Inc., a public company. The transactions included the transfer of its employees and negotiation of restrictive covenants and employment agreement for the two principals of the company.

He represents the trustees and executors of the estate of the late Fred. W. Brzozowski, which includes two active businesses in Palm Springs, California, and interests in the Chicago Bulls, the United Center, the Chicago White Sox, the Chicago Board of Trade, the Mercantile Exchange, the New York Comex, the Cotton Exchange and others.