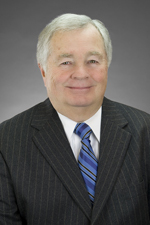 J. William Roberts is Senior Partner and serves as Special Counsel to management of Hinshaw & Culbertson LLP. He served as the firm's first national Managing Partner, from 1997 to 2016. Bill maintains an active legal practice in the firm's Chicago and Springfield offices, concentrated in complex civil and criminal litigation, government relations and gaming law.

Bill's career has been dedicated to public service through several prominent positions in various levels of government.

Bill served as Chief Legal Counsel to Illinois Governor Jim Edgar from 1995 to 1997. As the primary legal adviser for the governor, he managed a large portfolio of litigation, and acted as liaison with the general counsel of executive branch departments, boards and commissions. He also had responsibility for numerous Illinois regulatory agencies, including the Illinois Gaming Board, Environmental Protection Agency, and the Departments of Public Health and Professional Regulation.

Bill served as United States Attorney for the Central District of Illinois from 1986 to 1993. During that time, he was director of the Banca Nazionale del lavoro (BNL) Task Force, a complex inter-agency investigation of criminal conduct related to $5.5 billion in loans made by the Atlanta branch of an Italian bank to Iraq before the 1991 Persian Gulf War. In 1992 Bill also served as Chairman of the U.S. Attorney General's Advisory Committee of United States Attorneys and as a Senior Advisor to the Attorney General in Washington D.C. Prior to becoming United States Attorney for the Central District of Illinois, he was State's Attorney of Sangamon County.

Bill has served as Chairman of the Task Force on Professional Practice in the Illinois Justice Systems. He is past Chancellor and a Founding Regent of the Illinois Academy of Lawyers. In addition, he is past President of the Lincoln Douglas Inn of Court.

He served as counsel to the Minority Caucus of the Special Investigative Committee of the Illinois House of Representatives, which returned an Article of Impeachment against then Governor, Rod Blagojevich, in January 2009.

In the fall of 2005, Bill completed intensive training in mediation from the faculty of Pepperdine University School of Law's top-ranked Straus Institute for Dispute Resolution.

Mr. Roberts is a life member of the International Chili Society.