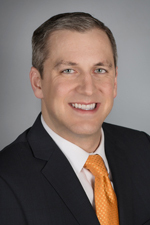 Prior to joining Hinshaw, Evan practiced law for six years as a judge advocate (JAG) in the United States Air Force Judge Advocate General's Corps, where he held multiple assignments in both Colorado Springs, CO and San Antonio, TX.

In addition to maintaining a steady practice in prosecuting criminal and disciplinary matters, as a JAG Evan served as a federal labor and employment law attorney, advising management on the discipline of federal civilian employees. He advised on more than 70 civilian employment law cases, including MSPB-appealable actions and EEOC discrimination complaints and investigations. He also served as the lead civil and administrative law attorney for the largest joint base in the Department of Defense, advising senior leadership on all non-criminal matters. In that capacity, Evan served as an Ethics Counselor, overseeing compliance with federal ethics regulations and financial disclosure reporting requirements.

In his last assignment, Evan was competitively selected to practice as a regional medical law attorney, providing subject matter expertise to nine Air Force medical facilities throughout Texas and New Mexico on the subjects of risk management, privacy, credentialing and privileging, malpractice, licensure, and regulatory compliance. Evan also negotiated training agreements for the joint Army-Air Force graduate medical education program at the San Antonio Military Medical Center and provided counsel to a number of hospital committees, including the Executive Committee of the Medical Staff, the Credentials Committee, and the Quality Assurance/Risk Management Committee. Evan was the legal counsel and voting member for two medical research committees: the Institutional Animal Care and Use Committee and the Institutional Review Board for human subject research. He has thorough knowledge of many federal regulations, including HIPAA, EMTALA, and AAAHC standards.

During law school, Evan clerked in the office of the general counsel for an international manufacturer of trucks, buses, engines and defense vehicles, where he assisted in matters including labor and employment, franchise law, and securities law. He was also a member of the Moot Court Society and Mock Trial.

Practicing as a Judge Advocate gave Evan the chance to dive right into representing clients and litigating cases at an early stage in his career. For instance, Evan was the lead counsel on his third litigated case, successfully advocating in contentious motions hearings and ultimately obtaining a jury conviction. He quickly gained a reputation for successfully litigating drug cases, and frequently mentored junior attorneys in their prosecution.

Evan's litigation skills were put to the test during a military training instructor scandal that received intense national media attention. He served as part of a prosecutorial team that successfully convicted or disciplined scores of trainers.

Evan was handpicked by the Air Force to serve as one of the military's first victim's counsel, representing sexual assault victims and advocating for them with decision makers and in court. He was the first to successfully fight to have a victim retrained in an entirely different career field, enabling her to escape routine interactions with her attacker and continue her fledgling career.

While practicing law in the USAF, Evan was a frequent lecturer on many areas of the law, and he created presentations still in use by others.

Mr. Bonnett, his wife, and family live in Rockford, Illinois.

Major Bonnett continues to serve as a judge advocate in the Illinois Air National Guard, where he practices military operational law for the 183rd Air Component Operations Squadron in Springfield, Illinois.