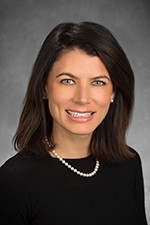 In addition, Esther advises private and public entities on constitutional limits on government powers, particularly in the transportation and eminent domain arena. Proficient in all aspects of government contracting, Esther represents clients before various state agencies, including the Illinois Commerce Commission, the Illinois Executive Ethics Commission and its Chief Procurement Offices and the Illinois Procurement Policy Board. She has successfully prosecuted construction contract claims against the Illinois Department of Transportation and secured favorable results for private businesses in multi-million and multi-billion dollar bid protests and procurement disputes.

As part of her active appellate practice, Esther has argued over a dozen appeals, including as lead counsel, in Illinois' appellate and supreme courts in precedent-setting media law and pension cases.

Prior to joining Hinshaw, Esther practiced for eight years at a Springfield, Illinois-based media law firm that serves as general counsel to various Illinois media associations. Before that, she was as a judicial clerk to the Honorable D. Price Marshall, Jr., Arkansas Court of Appeals.

Esther speaks German fluently and is conversant in French.